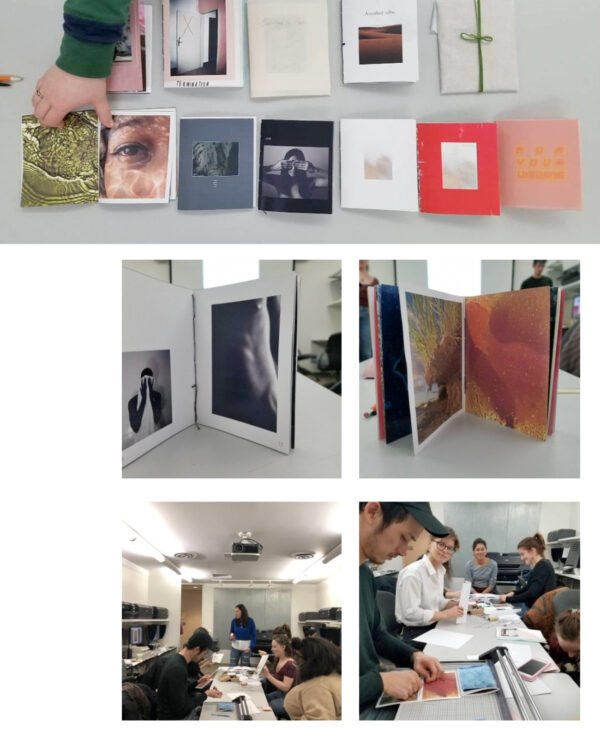 Zines are self-published printed works produced by creative people to convey ideas through images and/or words. Some the most forward-thinking and provocative areas of current photographic practice can be found in the photo-zine. Zines as printed matter are in some ways more accessible and democratic than photobooks

This class invites lens-based artists to publish their work through this more experimental approach. This weekend workshop will teach the basics of creating and publishing your own zine. We will consider zine history, inspiration, and planning. We will start with handmade zine techniques moving to breaking down the components for creating elegant and readable layouts using Adobe InDesign as the primary tool. This class covers document setup, placing and styling text, typography, working with images, creating a cover, imposition and preparation of the book for print.

Who Should Take This Class

Photographers and artists who would like to explore their work to explore in design layouts, both conceptually and visually. Part one of this workshop will focus on editing an existing body of work so it is advisable to have project or sequence to experiment with.

Have a body of work, ready for editing and sequencing.

Fabiana Sala was born in Varese, Italy in 1988. She moved to Lugano to attend The Swiss University of Art and Design (SUPSI). After graduation with a BA in Visual Communication, she collaborated with Theredbox Communication Design in Lugano (CH) where she assisted the Art director Alberto Bianda working on: the catalogue of Carrà’s Landscapes 1921-1964 (the first retrospective put on by a Swiss museum) and Visti&Scritti, by the Magnum photographer Ferdinando Scianna.

In collaboration with The World press photographer Alessio Romenzi, she did the graphic of the event “Syria, a forgotten war”, a Lecture by Alessio Romenzi. In 2013 she moved to Boston where she studied photography with Rania Matar at Massart (Massachusetts College of Art and Design).

A photography zine is a tool that photographers can use to tell a visual story, to inform an audience about a specific topic or issue, to showcase and advertise a new idea or simply create a preview of an ongoing project

Why Take This Class

Students will benefit in the following ways

Ambiguity and the New Subjectivity

From Sharing to Empowering